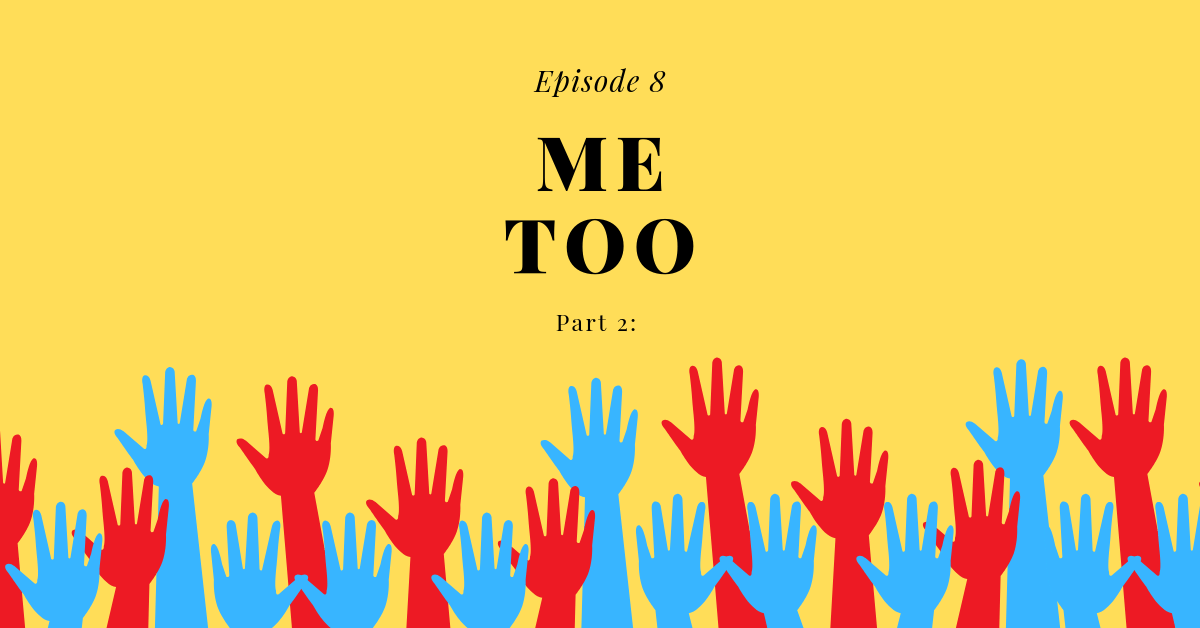 The second part of our #MeToo conversation! This one is pretty raw, vulnerable, and frankly… difficult for all of us. We sincerely hope you see our hearts on the subject, and approach the episode with patience and grace.

[6:15] Mary Scott: “Because if you’re going to avoid, you know every situation where it might be sensitive or awk as you say awkward, you know that awk, you know, I mean, I mean, I mean look the quid pro quo sexual harassment assault situation is totally different. That’s not what I’m talking about here, if you’re going to get ahead in your career you have to get in and you have to be prepared for sensitive and awkward situations.”

[18:40] Rachel: “Well, I think what you’re getting at Mary Scott, is looking at this as a human being and not just as a… because I mean, let’s just be honest. I mean I could think back that I’ve probably said things that made people uncomfortable, not necessarily in a sexual way, but just you know, you never know what’s going on in someone’s heart and mind and I do think if everybody gave each other a little more grace and space it’d be a happier world. And yet, like you just said Mary Scott, this is what’s so hard about being human because if we all just said, okay, let’s give everybody grace then things get out of hand. And then you have what we have within Me Too movement where there’s just all [00:19:20] this suppressed anger and resentment because women have been going through really hard things.”

[20:05] Mary Scott: “I have Rachel and I have Liz. I hope that our listeners out there wherever you are. Whoever you are listening. I hope you have some really good friends that you can go to and talk to. Because it makes all the difference to be able to unload your situation on a friend absolute and get them to help you. Help them, because you cannot think clearly it when you’re in the middle of all this.”

[22:00] Liz: “I feel very very strongly that as women. We owe it to each other to behave correctly in the workplace. Because every time a woman has an affair with her married boss it strengthens the assumptions that people have about men and women working together.”

[27:25] Mary Scott: You’ve got to normalize your relationships with with men, well really with anybody, but normalize them with men and the workplace. And if you’re a lawyer in my case, that means you know that first meeting that you have with them that requires a closed-door you close the door. There might be a little bit of an awkward moment, but then that becomes normal behavior, you know, if your normal behavior when you’re out on when you’re going on travel and is to go out to dinner at night, you know, you don’t need the… you’ve got to normalize that and you got to establish some boundaries boundaries there. I just I think part of the answer is just making you’re, making whatever habits that you should have whether they’re professional etiquette, or you know habits that are normal for your work environment normalizing them.

[38:20] Liz: “And then you know today I’m in my 20s and the what women today expect out of the workforce out of interactions in the workforces is very different than it was even a generation or two ago.”

[39:00] Mary Scott: “I think the correct approach is that we’re not animals, we make decisions. Whether it’s behind closed doors in private wherever and I think that we should make decisions and conduct ourselves in ways that you can see that that wouldn’t get you in trouble.”

[44:10] Rachel: “My takeaway from the Me Too movement is a lot of times shame and sorrow functions because we don’t talk with each other and we don’t share”

[47:40] Liz: “I think a thing that I realized is that I’ve been in those same situations you were just talking about Mary Scott where somebody put their hand on my leg, or people their hand the small my back, or said something made a joke or a comment that I found objectionable, but I didn’t process it in the time necessarily as harassment or assault or anything like that. But there are people there are women in particular who had those same situations and it affects them very very deeply and it is like what you were saying Rachel, have how they didn’t necessarily process it in the same way. I process it or they didn’t know they didn’t have the tools… but it made me realize that something that I might see as a thing that can be easily snipped in the bud is not [00:48:37] that way to another woman. It is something that deeply impacts them.”

[1:00:00] Liz: “…everything is about sex except for sex. Sex is about power… But of a lot of these situations, I think our men and power trying to assert their power.”

[01:04:15] Mary Scott: “I think it’s important to say what sexual harassment really is in the black letter line and verse. Sexual harassment is a form of sex discrimination which violates title seven of the Civil Rights Act. And we have something in our country called the equal employment opportunity commission the EEOC. They Define sexual harassment as unwelcome sexual advances, requests for sexual favors, and other verbal or physical conduct of a sexual nature which when such conduct explicitly or implicitly affects an individual’s employment unreasonably interferes with that individuals work performance or creates an intimidating, hostile, or offensive work environment.”